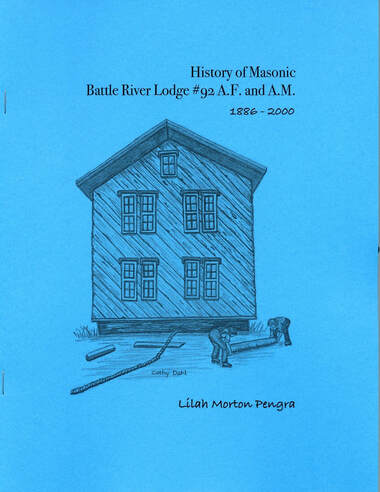 She then combined those primary sources with information from contemporaneous local newspaper articles and later family memoirs by some Lodge members.

Pengra included photos of members (with permission of relatives), scans from ledgers and newspaper articles, lists of members (including birth &death date, occupation, and family information), and photos of the various lodges used through the years.

The booklet is laid out in six chapters.

Chapter One: Constituting Battle River Lodge
This chapter covers the founding of the Lodge, from the petition to establish a Lodge in Hermosa in 1886, through the charter members' first meetings. It includes lists of members and photos of charter members.

Chapter Two: Growth and Stability
Pengra documents the early days of the Lodge, its financial struggles, dues, meeting dates (at one point meetings were scheduled around the full moon so those attending could find their way home on horseback), new members, and how the Brothers helped each other during the economic depression of 1893-97 and World War I. This chapter includes lists of members who received 50-Year Pins and 60-, 70- and 80-Year Palms.

Chapter Four: The First of Three Masonic Halls
From 1886 to 1928 the Masons used the second floor of a store as their Hall. During that time they attempted to raise funds and find a suitable place to build.

Chapter Five: The Second of Three Masonic Halls
In 1929 the Hermosa School Board decided to build a new school. Battle River Lodge eventually ended up with the old school building. This chapter explains how they managed to move the enormous building to its present location, and includes photos of the building as a school and as the new Lodge. Pengra was able to document the dollar amounts of the purchase of building, land, and renovations.

Chapter Six: The Third of Three Masonic Halls
The final chapter in the booklet documents the work to build a new Lodge with updated plumbing and heating, which was dedicated in September, 2000. Find out which of the many community members involved were called "the Three Musketeers," and why one member thought the new Lodge should be nicknamed "The Masonic Center of the Pancake."


​(This history has been reviewed and approved by Battle River Lodge #92.)
The Cover Art

​To purchase a copy of this booklet, see our storefront pages or contact us to find out when copies may be available during an event.

HAHA is a non-profit 501(c)(3) organization so your donations may be tax deductible, however, the amount of your contribution that is deductible for federal income tax purposes is limited to the excess of money over the fair market value of goods or services provided. In this case, since you are purchasing books at fair market value, this payment is not tax-deductible. Remember, your purchase does benefit HAHA’s mission of educating the public about our local history and allows us to cover printing and shipping costs. Hooray and we thank you!
Note: Lilah Pengra is researching and writing a number of smaller local-history booklets for HAHA, that we're making available as they are published, in a stapled paper version. We intend to collect them into a bound version at a later date.